The Mission of the Cinematograph
W.T. Stead's 1902 essay on the Warwick Trading Company.

The Cinematograph in Science, Education and Matters of State
Urban's 1907 booklet advocating the use of the cinematograph by teachers, scientists, doctors and the military.

The Delhi Durbar
Reproduction of the description from the 1912 Kinemacolor catalogue of With Our King and Queen Through India, Urban's famous set of films covering the 1911 Delhi Durbar.

A Yank in Britain
Extracts from Charles Urban's unfinished memoirs.

This is the programme of the first Kinemacolor film show. The colour process was first exhibited to the industry on 1 May 1908 at Urbanora House, but the public first saw the process at a special invitation matinée performance at the Palace on Friday, 26 February 1909, at 3.00 p.m. The programme was billed as ‘The First Presentation of “Kinemacolor”, Urban-Smith Natural Colour Kinematography (Animated Scenes and Moving Objects Bioscoped in the Actual Tints of Nature)’. 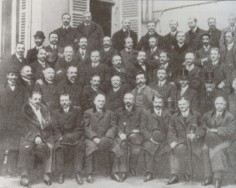 This photograph shows the delegates attending the Congrès International des Editeurs du Film, held in Paris in February 1909. Most of the major film businessesmen of Europe attended. Charles Urban is seated in the front row, second from the right. To his left are Léon Gaumont, Georges Méliès, George Eastman, Charles Pathé and George Rogers (manager of Urban's French company Eclipse). Others in the rows behind include Will Barker, Cecil Hepworth, Robert Paul, George Cricks and James Williamson. 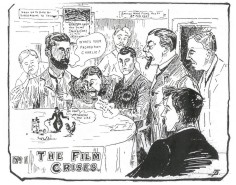 In 1905 Pathé introduced film on the British market at a price of five pence per foot, at a time when the standard rate was six pence. Theodore Brown drew a cartoon for The Optical Lantern and Cinematograph Journal which showed the leading lights of the British film industry looking to Charles Urban for an answer. 'What's your proposition, Charlie?' asked Robert Paul. Also portrayed are Cecil Hepworth, A.C. Bromhead, and Brown himself in the background. 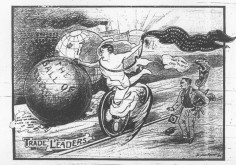 This bizarre cartoon from The Optical Lantern and Cinematograph Journal in 1905 is rich in information. It shows Urban posing as the Charles Urban Trading Company logo. The watching figure is the natural history cameraman F. Martin Duncan with a chameleon on a pole, a scene from a film he made for Urban entitled The Toad's Frolic. The text on Urban's banner comes from a letter he wrote to the journal, and reads, 'Although extremely preoccupied with the many details of our business, I shall, nevertheless, be pleased to "start the ball rolling"'. This alludes to the industry crisis referred to above. The chameleon is saying 'That's what I call "pluck"', while under the 'Ball of Reformation' is a man who says 'My little game of copying films is all up this time'. The cartoon is probably by Theodore Brown.

The logo here is that parodied by the cartoon above. It shows the Roman messenger god Mercury apparently travelling with the assistance of a train wheel (or possibly a reel of film), bearing a magnifying glass pointed at the world, while in the other hand he carries a banner bearing urban's much-repreated slogan, 'We Put the World Before You'. The logo appeared in all of the Charles Urban Trading Company's catalogues.

Urban poses with his camera team at Delhi, at the time of the great Durbar of 1911, which they would film in Kinemacolor. Urban is standing mid-picture with hat and cane. The cameraman nearest on the left is Albuin Mariner. His uncle, Joseph DeFrenes, is standing nearest on the right. The two cameramen behind have not been identified individually, but Alfred Gosden and Hiram Horton are know to have filmed the ceremonies for Urban, while John Mackenzie may have done. The names of the Indian servants are not known. 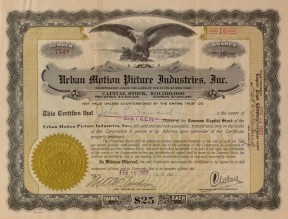 A stock certificate for Urban Motion Picture Industries Inc. This company brought together all of Urban's existing commercial interests when he moved to Irvington-on-Hudson, New York in the 1920s. Its capital stock was $10,500,000, of which $3,500,000 was Preferred and $7,000,000 Common stock. Shares were $25 each. The business collapsed in 1924. 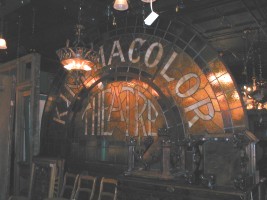 In 2002 a remarkable stained glass sign for a Kinemacolor theatre was uncovered in Vancouver, Canada. The Kinemacolor Theatre was located on 603 Granville, Vancouver, opening on 24 February 1913 and closing in 1914 when Kinemacolor's Canadian business ended. The theatre changed its name to the Colonial and the sign was still visible in 1972, when the theatre was torn down. Somehow the sign ended up at a local steak restaurant. When this relocated, the sign was rescued from a demolition crew by a local antiques dealer. 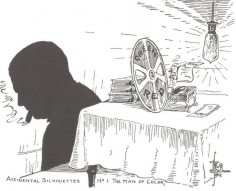 Theodore Brown cartoon of Charles Urban as the 'Man of Color'. Urban is shown silhouetted by a red-and-green Kinemacolor filter. Brown, who was editor of the Kinematograph and Lantern Weekly was also an inventor, the development of whose filmless disk viewer the Spirograph was nurtured by Urban from 1907 onwards, and brought close to commercial development in the early 1920s during his Irvington period. 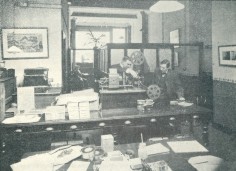 Urban (on the left) photographed in the Charles Urban Trading Company offices at 48 Rupert Street, around 1905. He is demonstrating a Bioscope projector to an employee (unidentified). Taken from one of the Charles Urban Trading Company's catalogues, which were always richly illustrated with photographs of his motion picture equipment, camera staff, and images taken from their films

Percy Smith was probably Urban's most noted cameraman. His speciality was films of natural history, and he developed pioneering stop-motion photography techniques to film such natural activities as plant growth. In this photograph, Smith (on the left) is seen filming in his garden in Southgate, London. After leaving Urban's employment, Smith would gain much acclaim for his Secrets of Nature film series of the 1920s and 1930s. 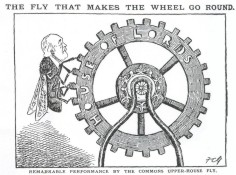 In 1908 Percy Smith made two films for Urban entitled The Balancing Bluebottle and Blue-bottle Flies Feeding, which demonstrated assorted remarkable feats undertaken by a bluebottle, filmed in close-up, such as balancing a cork on its legs and climbing a revolving wheel. Such was the popular interest in these films that the cartoonist Sir Frank Carruthers Gould used their imagery to depict the comparable feats of skill by British politicians. In this cartoon (from the Westminster Gazette), Conservative leader A.J. Balfour is shown climbing the wheel as the 'Commons Upper-House Fly'. 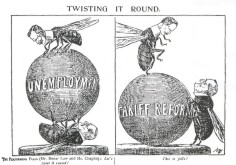 The second of Sir Frank Carruthers Gould's cartoons for the Westminster Gazette inspired by Percy Smith's The Balancing Bluebottle and Blue-bottle Flies Feeding shows the Conservative politicians Bonar Law and Harry Chaplin, in guise of a pair of flies, twisting round a ball marked 'Unemployment' by means of Tariff Reform, the great political debating point of the period. 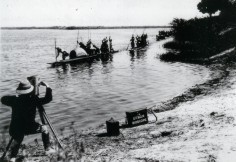 Charles Urban's cameraman Joseph DeFrenes, shown filming with an Urban Bioscope (its name prominently displayed for advertising purposes) in Africa, c.1909. DeFrenes was an Austrian, formerly a picture postcard photographer in the Tyrol and Naples, who had been recommended to Urban in 1906 by his friend the American lecturer Burton Holmes. He became Urban's senior cameraman, and would go on to be a prominent producer of industrial and educational films in America. 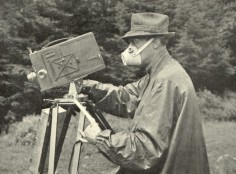 Raymond L. Ditmars was Curator of Reptiles at New York Zoological Park. He made a number of popular natural history films (with an emphasis on light entertainment), and in 1921 he made an hour-long natural history film The Four Seasons for Urban, which enjoyed much acclaim. In its attention to detail as well as in its anthromorphism it served as a model for the many wildlife documentaries that were to follow. In this photograph he is shown filming a skunk.