A Yank in Britain
When Charles Urban arrived in Britain in August 1897 he very swiftly set about not only reorganising the company of which he was manager, but made his firm and its products the focal points for the national industry, and a major force in film worldwide. He just as swiftly developed his own conception of the proper purpose of cinema, which was based on actuality. For Urban, increasingly to educate was to entertain. He did all this through the Warwick Trading Company.

The Continental Commerce Company
Urban began at the London office of Maguire & Baucus, which traded in films as the Continental Commerce Company, and was based at Dashwood House, Broad Street, near Liverpool Street railway station. The company had been established in Britain since 1894, when it introduced the Edison Kinetoscope, and hence the first moving pictures in Britain in October of that year. It was run by Joseph D. Baucus, an American lawyer, and American-Irishman Franck Maguire whose business it was seek out new machines for the company to exploit. The business was heavily in debt to the New York parent company and the victim of high interest loans taken out on a fatal business policy of short termism. Although the company's film business was full of potential, as it held the rights to exploit both Edison and four perforation gauge Lumière film, it was not profitable.

The Warwick Trading Company
Urban changed all this with a dynamism that must have shaken all those around him severely. His first action was to relocate the company. He saw that the burgeoning film industry was not centred around Liverpool Street but around the High Holborn and Gray's Inn Road area: Robert Paul was in Hatton Garden, John Wrench and Son were in Gray's Inn Road, and Urban found premises at Warwick Court, close by Chancery Lane, moving the firm there by September 1897, within a month of his arrival. He next changed the name of the company. Noting a certain anti-Americanism in the film business, as well the clumsiness of the current names of Maguire and Baucus or the Continental Commerce Company, he named them after their new location - the Warwick Trading Company ("a good solid British name", thought Urban).

Success
The effect of Urban's management of the company can be seen quite simply by the huge rise in sales figures: sales were £10,500 in 1897, and had risen to £45,000 by 1901. Urban soon had the company making films, and determined that the company would be dedicated to a particular kind of film, namely films of news or actuality. Urban acquired the distribution rights of a number of prominent fiction film makers, including James Williamson and G.A. Smith of Brighton and Georges Méliès of Paris, as was necessary if the premier film company in Britain was to offer exhibitors a complete service, but the Warwick Trading Company itself was to specialise in what we would now call documentary film, and it was films of reality that became the company's trademark - and Urban's throughout his film career.

Technicians
The reputation of the company was primarily based on the dependability of the Bioscope projector, and Urban instigated another trend which was to feature throughout his career, that of depending on the mechanical abilities of a succession of technicians whose genius he encouraged, financed, and then took the glory. First of these was Cecil Hepworth, who made crucial adjustments to the Bioscope, and then constructed an invaluable automatic developer and printer in the short time he was with Urban. G.A. Smith took over the company's processing work after Hepworth, and became an increasingly trusted associate of Urban's. There was also Alfred Darling, a Brighton engineer, who undertook the construction of the various equipments marketed under the Warwick name, including the various modifications to the Bioscope projector. 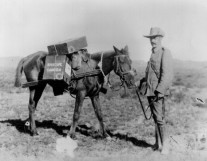 A commitment to the actuality film, and especially in his earliest years as a film producer the travel film, meant a team of travelling cameramen. Among these were the mountaineering cameraman Frank Ormiston-Smith, Jack Avery (Urban's brother-in-law) and most famously Joseph Rosenthal, who was Warwick's leading cameraman during the Anglo-Boer War of 1899-1902. Urban had four cameramen in South Africa in different places and at different times (Edgar Hyman, John Benett-Stanford and Sydney Goldman were the others), but Rosenthal was the star name among them, and his special talent for securing the ideal image for any corner of the earth under whatever difficulties was greatly cherished by Urban. The filming of the Anglo-Boer War becaming a testing ground for the infant film industry in Britain, and the public enthusiasm for the accomplished and regular diet of films supplied by Rosenthal and his fellow war film correspondents help to establish the industry firmly in the public eye.

Breaking Free
Urban had clearly been the making of the Warwick Trading Company, yet he was still the employee of Messrs. Maguire and Baucus, and they were unlikely to keep hold of him. Urban had brilliantly exploited the territory of Britain - an area small geographically but densely populated, making it ideal for a commercial distributor and an extremely valuable territory to control whatever one's business. Maguire & Baucus tried to hold onto Urban first by offering a high salary, then generous share terms, and then through the courts trying prove he had no right to operate as an individual, the Bioscope being their trademark and not his. But wilier and more gifted than his enemies, Urban broke away from the Warwick Trading Company in 1903 to form his own Charles Urban Trading Company.