A view of life 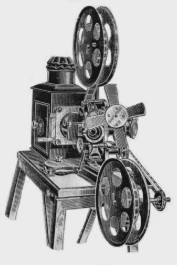 The Bioscope
Charles Urban first made his name through the Bioscope projector. It proved so successful and popular an invention that it became a generic term for cinema itself. Its genesis is a little obscure, but its impact was immense.

Problems with the Vitascope
Urban had found problems exhibiting the electrically-driven Edison Vitascope projector in Michigan through 1896, where many towns were not yet connected to an electrical current, or the local supply was incompatible with the Vitascope, which required direct current. He was similarly frustrated by the limited capacity of the Vitascope, which could show only fifty foot rolls before the film had to be changed, causing delays in the programme. He made some crude adjustments, recalling "I had film reels constructed by using nine inch tin discs screwed to each end of an empty Clark's thread spool the centre hole of which was enlarged to fit the reel holder. This reel held about 750 feet of film". He cemented the films together with fish glue. This could only be a temporary solution, and he next went to a New York engineer of his acquaintance, Walter Isaacs, and instructed him to manufacture a projector that incorporated the take-up spool, plus a handle to free it from an electricity supply, and something to make it flickerless, flicker (caused by low projection speed and the use of single-blade shutters) being the chief complaint of all early film audiences.

Flicker vs Rain
The original Bioscope as devised by Isaacs and Urban was an excellently engineered machine, which employed the eccentric 'beater' movement for its intermittent, borrowing from the patent of the French inventor Georges Demenÿ. It avoided flicker by having no shutter, with the consequent disadvantage of a blurred effect known as 'rain', though increased illumination and rapid pull-down partly compensated for this. It was operated by a handle. An attachable spool-bank allowed for continuous projection if so desired. It had no belts or chains. The simple gate comprised two velvet pads. There was no take-up reel, and the finished film simply fell into a basket. It was strongly promoted and warmly received for its steady picture and absence of flicker, which for many seemed more than adequate compensation for rain. It was a fine projector, whose significant defects were corrected by Cecil Hepworth in Britain in 1898 (he added a shutter, an improved gate and a take-up device); further improvements were to be made by Alfred Darling. Practical and inventive features were always to distinguish the Bioscope, establishing it as one of the most reliable and popular projectors on the market for over ten years.

Etymology
The word 'bioscope' was not new. The word is constructed from the Greek (bios, life; skopeein, to look at), and the Oxford English Dictionary gives its traditional definition as "a view or survey of life". The word was coined by Granville Penn in his 1812 Christian tract The Bioscope, or Dial of Life. Penn's book included a separate card on which was illustrated a dial marked from nought to seventy, marking the ages of man from childhood to decay in decades, with eternity waiting before and after. A pointer was attached for the reader to mark out his current age, and hence to contemplate the lessons in Penn's book on the allotted span of human life and to avoid the belief "that life is a continuous now". This dial was the bioscope, and just as a horoscope was a measure of the heavens at the hour of birth, so the Bioscope was the "general measure of human life".

Biocopes of several kinds
For the first use of the word in a moving image context, Hermann Hecht's monumental survey of pre-cinema, Pre-Cinema History, records an 1852 reference to the Stéréo-fantastique or Bioscope of Jules Dubosq, a motion picture toy which produced stereoscopic pictures. In 1892 Georges Demenÿ patented a motion picture device he named the Phonoscope, which projected brief images from rotating glass discs. When the Phonoscope was marketed by Léon Gaumont from the end of 1895, it was renamed a Bioscope. In view of Urban and Isaacs' Bioscope's use of the Demenÿ beater movement from his 1893 camera, there may be more than coincidence in Urban's choice of name for his projector. Also at the end of 1895 the German Max Skladanowsky named his projector a Bioskop, though it is unlikely that news of this minor invention would have made its way to Urban. It was the Urban Bioscope that popularised the word and made it for a long while a generic term for the cinema, especially on British fairgrounds. A notable British film trade paper of Urban's era was called The Bioscope; in South Africa the word for a cinema is still a bioscope.

Maguire & Baucus
The Bioscope in its modified form was to destined make the greatest impact in Britain, and to all those worldwide territories to which the Warwick Trading Company exported. At the end of 1896 Urban was certainly not thinking of Britain, and was planning to break free from the Michigan Electric Company and go out on his own with the first fifty Bioscopes Isaacs was constructing for him. But on a business trip to New York he was surprised to meet up with the phonograph businessman Robert Thomae, now manager of the New York offices of Maguire & Baucus, agents for Edison films and film projectors in Europe. Thomae told Urban that the company was looking for a new manager for its London office, and he strongly encouraged Urban to apply. Maguire & Baucus were very interested in Charles Urban, the resourceful and ambitious young salesman, though they were undoubtedly also very interested in his Bioscope projector, which could free them from too great a tie to Edison and its product. Urban spent a six month trial period in New York before sailing out to Britain on 14 August 1897. From being a very small fish in an emergent industry, he now had a rich opportunity to make a grand impression in Britain. A stock of Bioscopes had been sent on before him to the Maguire & Baucus London office, where the staff found they could not make the machine work, and could only await the arrival of the genius manager from America.